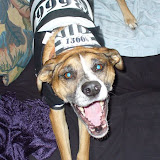 My name is Jeff and my best friend is Bender Bending Rodriguez – Dog. He is a Boxer mix.

Bender came into my life in April of 2006. He was 4 months old. I adopted him from some wannabe pet adoption place. He was 20lbs under weight and a week from death. He had a horrible case of worms to the point the vet tech stopped counting. They were feeding him some random food and letting him run with chickens. After months of meds and proper food he was back to health.

Some time in early 2007 I found out Bender was allergic to dust mites. A difficult task, but out with the carpet, sheet on every thing he’s on so I can wash them, and medication. Shortly after in mid 2007 Bender was diagnosed with diabetes. From there it has been a battle to keep his diabetes under control.