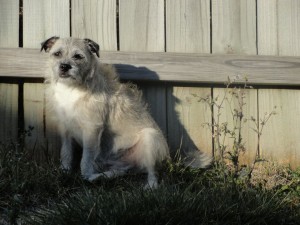 Thank you for this blog! My husband and I adopted a 3ish year old dog from one of those ‘wannabe pet adoption places’ (ha, too true) in March, named Buzz. He was our second terrier mix, we adopted a terrier mix the year before and had other problems with her – things like too many worms to count, mange, and eventually bladder stones that had to be surgically removed. We had health problems with Buzz from the beginning. He apparently was with the pet adoption place for over 2 years, but they told us that he had only been there for 6 months. It wasn’t until they got his paperwork together that they realized he had been there that long. I guess that was a sign of the type of care he received there, or should I say lack of care. Anyways, he was recently diagnosed w/T1 diabetes – along w/pancreatitis, colitis, and general inflammation of pretty much every internal organ he has. Your blog is super informative, unlike every other website that I’ve googled under the term ‘diabetic dog’. It’s nice to read about someone going through the challenges that lie ahead of us. To sum this all up, I just wanted to let you know your blog is very much appreciated!!

We got Mickey from an animal shelter about 3 years ago, and we estimate his age to now be around 6 years old. He’s a Miniature Schnauzer/Pomeranian mix. He’s also a “tripod” – he came from an abusive home and before the shelter allowed us to adopt him, one of his back legs had to be amputated. He does so well with his three legs, he doesn’t even know one is missing. Mickey was diagnosed with diabetes in late 2010.