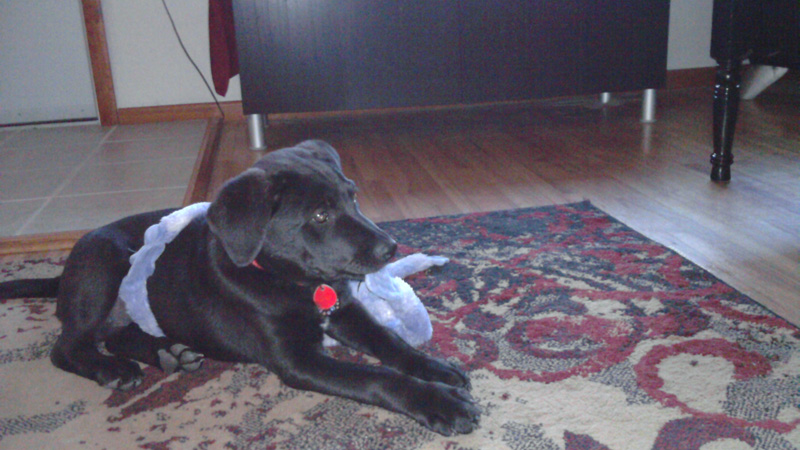 I don’t feed Bender table scraps or any sort of people food. He doesn’t get my pizza crust or the fat from my steak. If I do feed him any thing I’m sharing my apple or some other fruit with him, which is almost daily. Because of this he doesn’t beg and in general ignores all people food to the point where he won’t snatch it off a poorly guarded plate. But outside of my home it is much harder to keep him from eating people food. And its even hard to keep people from feeding him.

During the summer we went to a party and took our dogs because it was a friend’s house and dogs are welcome. All of my friend’s know that Bender is Diabetic. Don’t feed him any thing. Any new people I meet I always let them know to not feed Bender. They abide and are usually more perplexed that Bender is diabetic because they didn’t think dogs could have diabetes.

As the night wore on a new group of people showed up. As more and more people showed up and more and more dogs, I noticed that more dogs were getting fed people food. Bender trying to take full advantage of the situation tried to snake some food from some one’s plate because they weren’t being careful to guard their plate very well. I know what you are thinking, why am I not watching Bender. Oh, but I am. But like any dog, it only take a second for him to grab some food and even less than that to swallow it. And since he knows he isn’t allowed to eat people food, he is even faster.

So I just finished scolding Bender for trying to snatch food from some one’s plate, then explained to the group of people why Bender can’t have people food. All their plates moved a little higher, away from the reach of the dogs. All was good and Bender’s blood sugar was saved for another day.

Until a few minutes later I turn around to keep an eye on Bender since he walked behind me. He walked right up to a lady who I just told not to feed Bender. She reached out to pet Bender. There was a plate on her lap with two big sugar cookies on it. I see her other hand move the plate not away from Bender but toward him. The distinct and unforgettable (and unforgivable) offering motion. Gone, was one cookie. I reached him as he grabbed for the second. I pulled the cookie from his mouth and dropped it back on her plate.

I told the lady (not so nicely) that Bender isn’t allowed to have people food and to not feed my dog since he is diabetic. I just got done asking you not to feed him. Plus a dog shouldn’t have a cookie to begin with let alone a diabetic dog! Her response “Oh, he’ll be fine. I’m diabetic too.” I had a few choice words for her. None of which were nice.

Luckily Bender was still running around having fun, burning off energy. When I checked his sugar later on when we got home he was close to normal.

The worst part is most offenders of dog feeders are adults. The ones that should know better. The ones that can understand what diabetes is. The ones that have control of their actions. Shockingly the ones who are the best about Bender’s condition are the kids.

When ever we hangout with my wife’s family there are always a ton of kids around. Food gets left every where and the dog’s have a field day. Unacceptable when it comes to Bender. But Bender rarely gets any food from any of them. They always clean up their plates and keep their food out of Bender’s reach. For one simple reason. We tell the kids that if they feed Bender that he could die. Stretch of the truth but it works. It works so well that the kids will even scold the adults who are being lazy and might let Bender get a bit of food. They will move plates, report any offenders, and in general keep an eye on Bender. The kids feel important by keeping the dog safe and Bender’s sugar levels are kept in check.

When it comes down to it. I honestly don’t mind if Bender gets a bite of people food here or there. But the problem is I can’t and don’t know who all has given him food. What happens if ten people all give him a bit of food but I only see two people do it? I think he might be doing Ok, but his sugar is spiking before I know it. So its better for Bender’s health that he doesn’t get any people food at all from any one.

This doesn’t just apply to my dog. I have a friend who’s dog isn’t allow to have people food either. It will cause him to have massive diarrhea. He isn’t allowed to come over to the parent’s house because the dad will sneak him table scraps. Then later that night… POOP… EVERY WHERE! Even after countless talks, the sneaking of table scraps continues so now the dog stays at home.

So the next time you feel like feeding a dog. Think twice. Ask first if it is OK.