Training your Dog to Run on a Treadmill 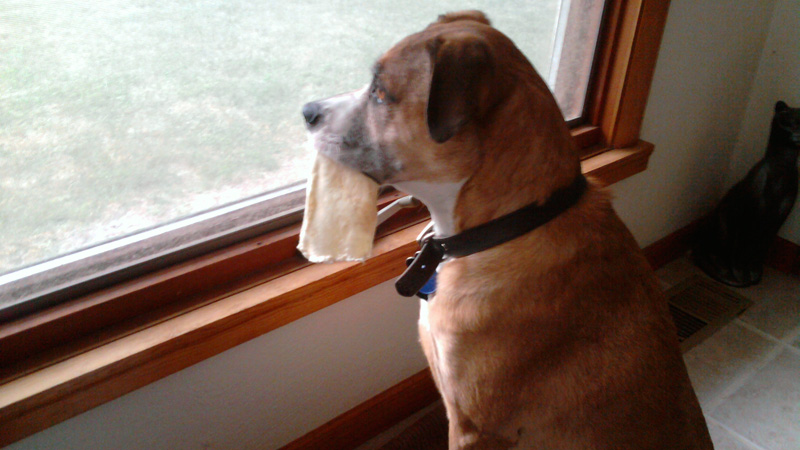 I live in a crappy state that has the season called winter. Gray skies and bad weather with a question of why do I live here again? Due to this unfortunate change in weather it makes walking and running the dogs rather difficult.

My normal routine is to ride my bike and the dogs run next to me. A feat I mastered with Bender long ago. Which wasn’t too difficult considering Bender loves to run, will follow me any where, and I have control over him due to his harmless but effective pincher collar. Luna had no choice as she was attached to Bender by a 1.5′ leash and was forced to go where he chose.

Now that it is cold out and particularly crappy weather I can’t run and some times walk the dogs every day. So knowing this during the summer I found a small apartment sized treadmill for $10!

My, oh, My Bender hates it. I think it is just the sound the motor makes. Luna on the other hand loves it. She will run on it with no leash.

Normally Bender would start doing what I want him do after about 5-10 tries. The treadmill isn’t the case. I’ve had to resort to actually training him on it.

Hooking Bender to a leash and then to the treadmill doesn’t work. He will just jump off the side. Even with that option removed he will basically give up and get dragged by the treadmill.

Getting Bender to get on the treadmill still is an effort, to speed the process up I just put him on the treadmill. At first I had to attach a leash to him with his pincher collar and the leash was attached to the treadmill. Before starting I would give him a little PB on the back of a plastic spoon (about the size and thickness of a dime, remember he is diabetic). Give him a positive experience.

While he is busy with the PB I start the treadmill. I usually start him at 2-3 mph and then go up to 4.5mph for a while then back down to 3.5mph. At first I had to keep feeding him a little PB off of the spoon. If I stopped he would jump off rather quick or if I moved from his side. Soon I would take small breaks between PB rewards and would move away from the treadmill. But not too far, he is still on a leash, don’t want any thing to happen to him.

At the end of the run I would slowly stop the treadmill, then have Bender sit. Before letting him go I would give him another spot of PB.

This has been going on for about 1.5 weeks. Now when Bender runs he gets PB every .15-.20 miles. He is no longer on a leash. He will run about a mile before wanting to quit and jumping off/stopping on his own. I’ve had to block the side of the treadmill that isn’t against the wall because he will still just jump off. But I can sit at my computer and he will run with minimal supervision.

With a little bit more work I think he will jump on the treadmill by himself and run without the side blocked for as long as I want him to. I’m hoping that will be 3-4 miles, which is what we run on the bike.

Does your dog run on the treadmill? What have your training experiences been with it?